Update August 22, 2019 – well there’s been a lot of patio hopping this summer which I’m not complaining about at all.  I’ve officially visited the first set of patios I had written about and as promised,  here are a few more spots I had a chance to check out over the last few months.  If the weather cooperates, the patio hopping will continue!

Original Post – Well it took a minute but I think summer has finally made its presence known in Toronto.  There’s still a little too much rain for my liking but I’ll take what I can get.  I’ve been trying to keep up with these monthly round ups I figured this time I would not only cover two months, but  keep this as my ongoing patio roundup.  So bookmark this post as I hope to keep it updated throughout the summer!

One of my favourite things to do in the summer is sit on a patio and either catch up on work or just enjoy the sunshine with friends and a beverage.  This year has seen some BEAUTIFUL new patios open up in the city along with some tried and true ones.  Here’s a round up of the patios that currently have me loving the long lazy days of summer:

I stumbled upon this patio during a Sunday Funday adventure with a friend was just completely in awe of this charming and beautiful backyard patio/garden.  Twinkly lights, a plant filled overhead “roof” and delicious wines by the glass.  I loved how private and hidden the space was, made me feel like I was outside of the city or on vacation.  Great spot for a catch up with a friend or even a first date. Bonus, the inside is equally as adorable. 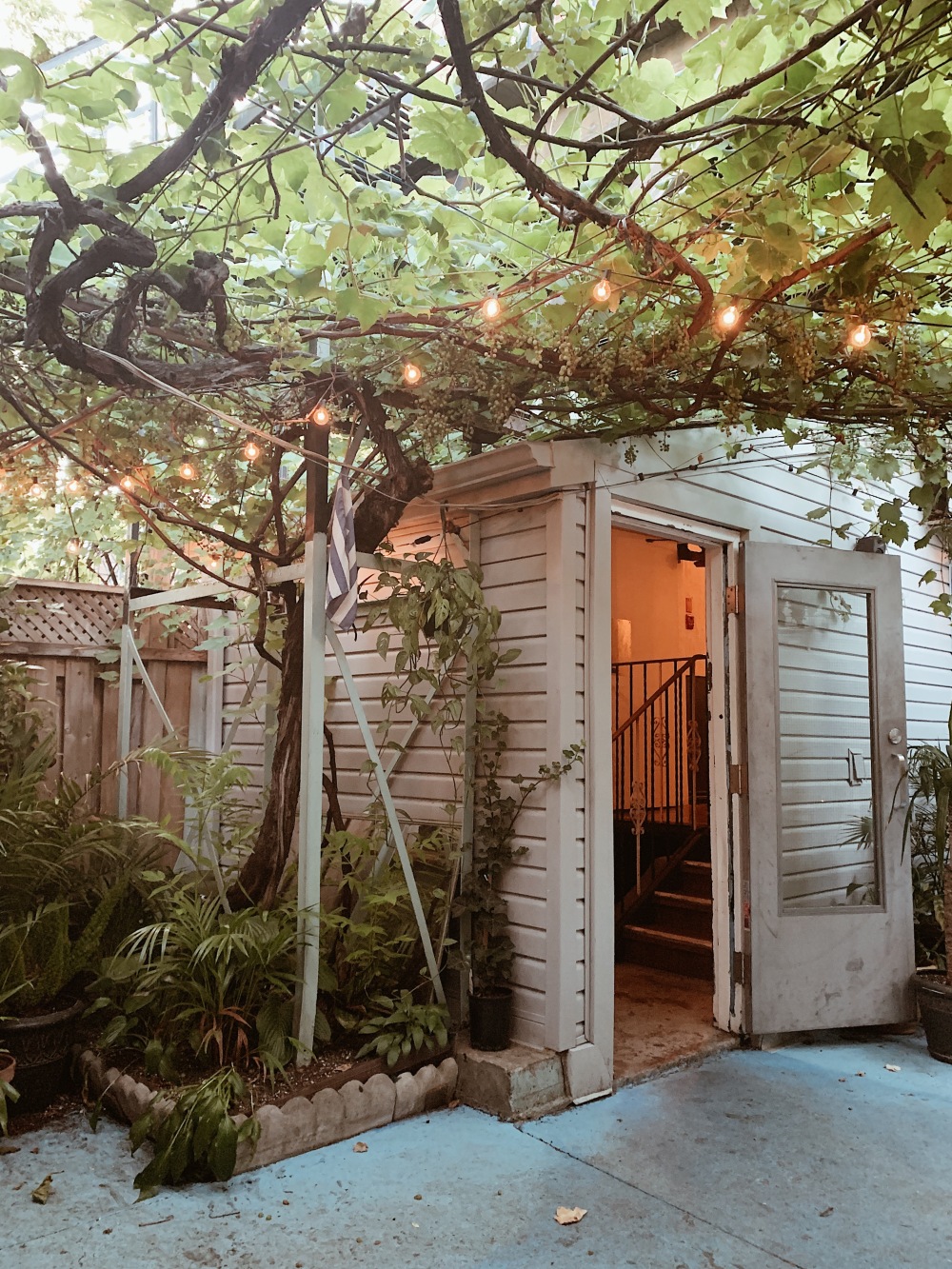 The Rec Room, better known as the adult chucky cheese by the Rogers Centre has now been open for a few years and this year they officially launched their patio space.  It definitely feels like an urban garden with the views of the condo skyline just behind you.  Although the space is quite adorable, I wasn’t a big fan of the food and the chairs were super uncomfortable.  At least you know that there are games awaiting on you on the inside which are always super fun to play. 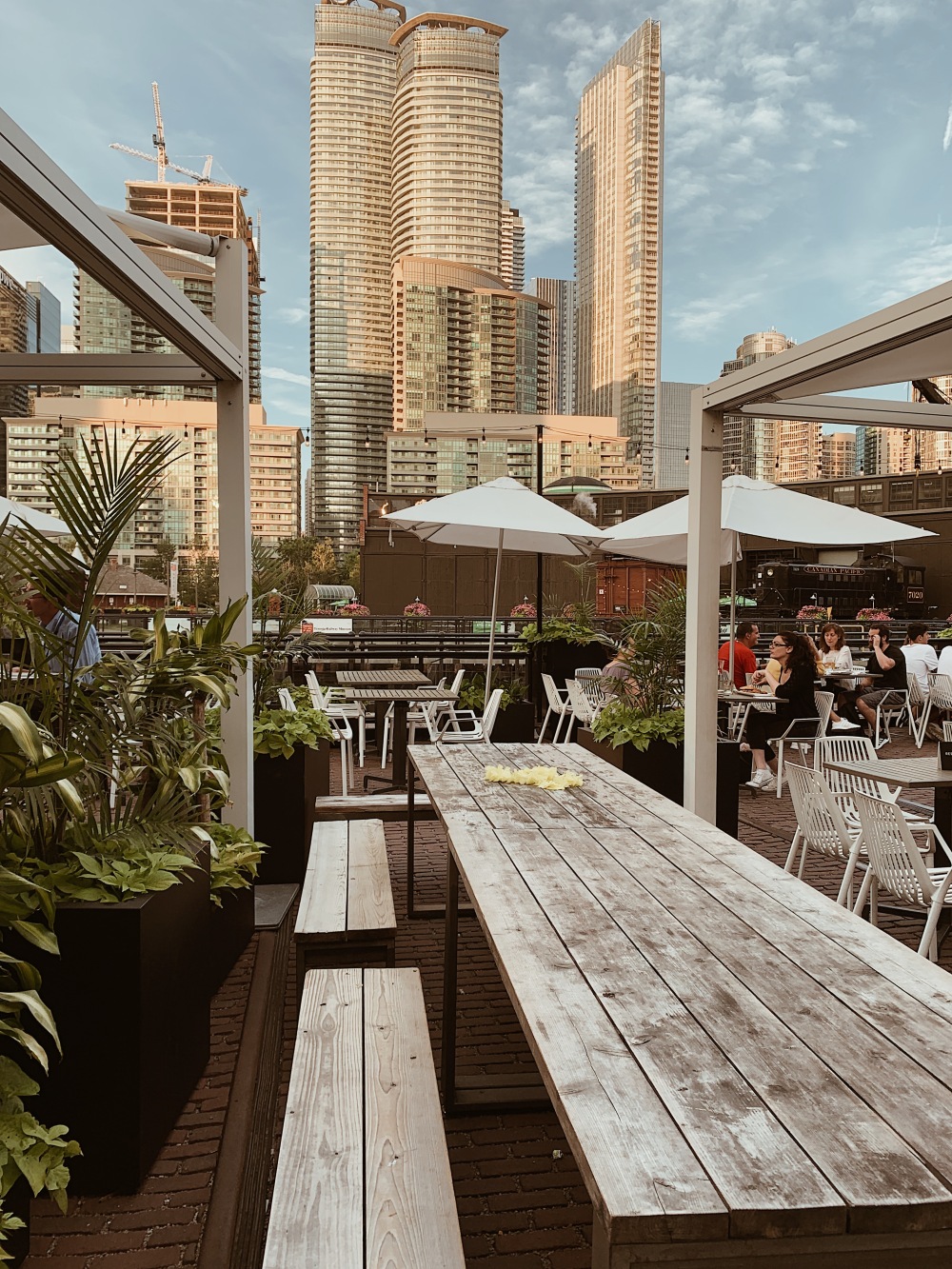 This is probably one of my favourite patios in the city because not only is it in the heart of the city, it is adorned with tropical coloured umbrellas and a variety of seating options.  The best part is that the food is INCREDIBLE and if you stop by between 2-5pm you can take advantage of the patio and some pretty kick ass happy hour deals.  My favourites are the tuna bowl, bang bang shrimp and you can never go wrong with any of their pizzas.

Lavelle happened to be one of the patios I frequented the most this summer because a lot of my friends decided to have birthdays up here.  The views of the city from this rooftop are hard to beat.  Probably some of the best in the city in my opinion.  I’m definitely more of a fan of Lavelle during the day and just until sunset.  After about 10PM you’re smack dab in the middle of the King West crowd and likely going to pay about $20 to get in.

The Thompson Hotel is probably the only other rooftop patio that could beat the views of Lavelle.  On any day you get breathtaking views of the entire Toronto skyline with the CN tower as the main attraction.  It’s a smaller patio and again, another one that I prefer to spend time on during the day.  In the evening you can expect a DJ and probably a line up to get in. 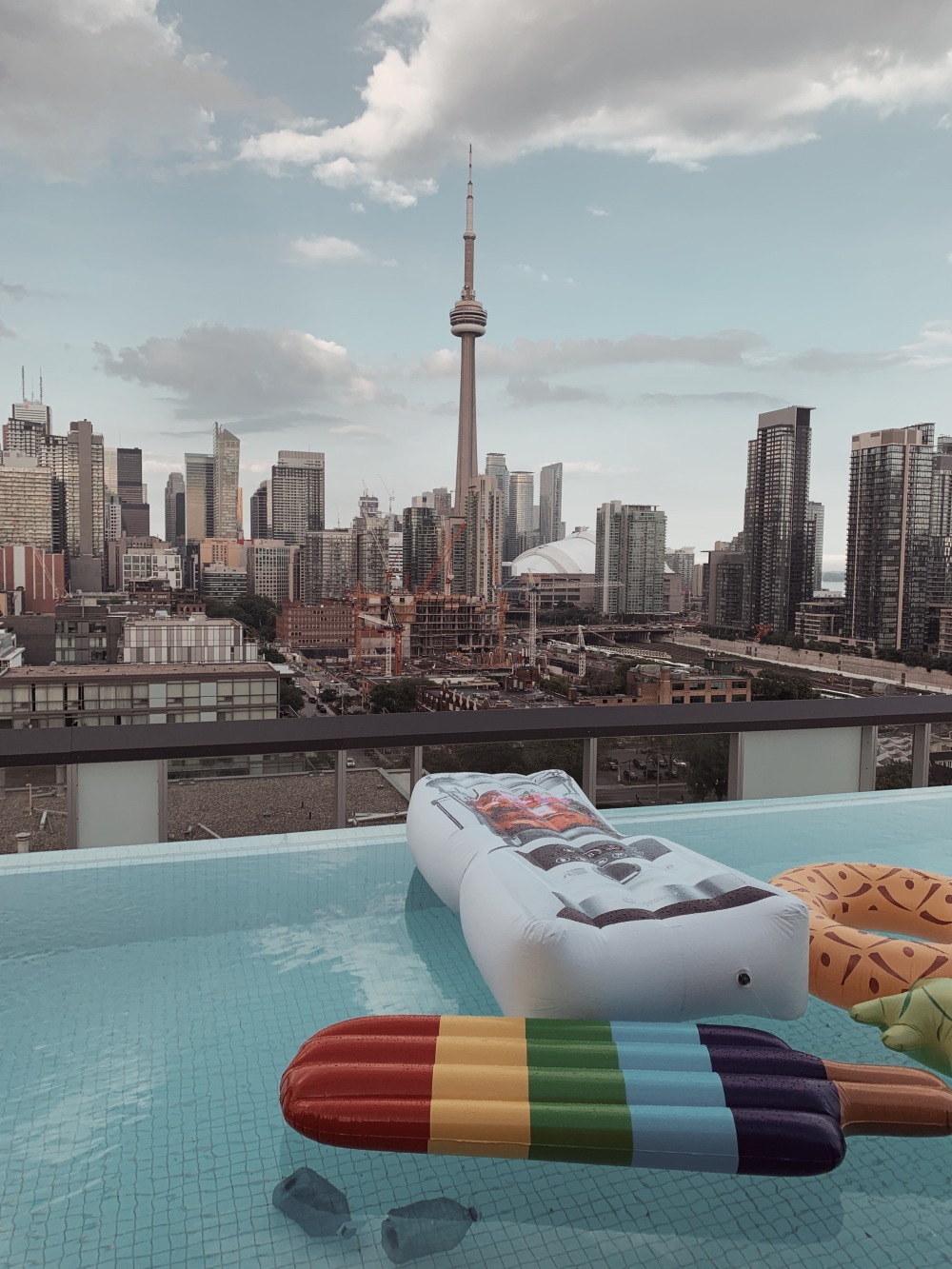 This patio might officially be my new work from home spot.  I checked out We Brew Cafe on the day of the Raptors Victory Parade of all days and it was the perfect, quiet getaway.  It’s set right on the Harbourfront so you get some really nice views of the water.  They proudly serve Lavazza coffee, snacks and with free wi-fi, it’s the perfect spot to catch a few rays and get some work done.  Or at least pretend to 😉

Baro launched their new rooftop patio this year and it’s a stunner.  I had a chance to check it out just last week and in between the the delicious margaritas, the outdoor/indoor feel and the INCREDIBLE music, I was sold.  I will also say that the patio was PACKED.  You can’t make reservations for the patio so you have to take your chances with putting your name down and waiting for a table, otherwise it’s standing room only.  I will say they move pretty quickly, they had estimated almost two hours, but we were seated within the hour.

The Gaarden is the newest patio on the Toronto scene and I had a chance to check it out during their media opening.  It took over the space formally known as Cube and looks like an outdoor garden oasis.  It’s been designed in partnership with Hoegaarden and Ink Entertainment and has high top table seating and booths.  They have classic cocktails and of course sharable bites which are perfect for day drinking.  I will have to say, it did sort of have that feeling when you walk into a nightclub during the day, almost like you can feel the leftovers from the night before.  Not my favourite of the bunch but its around the corner from where I live so hard not to at least check it out once!

Jump has never been a go-to in my books but it has been a Toronto staple for years.  Little known fact, it was one of the first restaurants to find its way into the Financial District of Toronto.  Any patio that looks like a hidden garden oasis with couches and drink specials will have a special place in my heart.  Monday to Friday enjoy bourbon cocktails for $12 or specialty cocktails for $10 along with $9 wine.  Wonder if they have Wi-Fi for those “work from home” days 😉

The Roof at Soco

Okay so it’s not a roof, more like a terrace but that doesn’t take away from the fact that it’s one of my favourite patios.  I even call it my secret patio because not that many people know about it.  Not only does it offer you what might be the most incredible view of the CN Tower, but it has tons of comfy seating, great drinks, fire pits and music that will keep you dancing in your seat.  They are located in a hotel so they aren’t open super late in order to comply with noise by-laws but you’ll definitely be able to take in some gorgeous sunsets.