Sigh.  BBQ.  Brings to mind the warm summer breeze, the smell of freshly cut grass and sitting outside on the patio enjoying good times with good friends.  Personally I don’t believe there is a particular season for BBQ but you can’t deny that summer is not the same without it.

On what was probably one of the coldest nights we’ve had this winter, my buddy and I ventured out for dinner for a long overdue catch-up sesh.  She enjoys trying out new places as much as I do so we landed on Electric Mud BBQ.  I really didn’t know much about Electric Mud aside from the fact that it was in Parkdale and from the same family as Grand Electric.  First of all, they take reservations so in my books I like them better than Grand Electric already.

The restaurant is literally in the middle of nowhere.  It’s on a side street off Queen and stands out as the only thing of any interest within the area.  So as you walk up from a quiet and desolate street you are instantly transported into a loud, bright, bustling and smoky space that is Electric Mud. The space is small so its safe to say that I would consider most of their tables communal seating because even if the tables have “space” between them, you’re pretty much sitting together.  I also couldn’t help but feel like I had been transported to the set of True Blood with the music, vibe and strange yet kitschy decor. 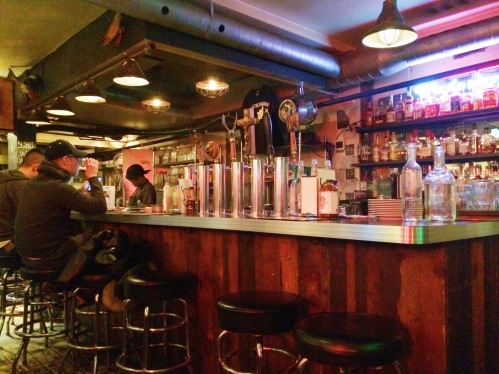 We got seated pretty quickly and started perusing the drink and food menu.  I ordered their version of an Old Fashioned called the Grand Fashioned which tasted like candy.  I don’t know when I started liking boubon but if it tastes like this, I’m in!  No wonder I wanted to order it by the pitcher.  We quickly decided on the food and on the chopping block for the evening was:

If you are on a diet of any kind, this is not the place for you.  I on the other hand will be coming back often.  The first thing to come out was the crack rolls.  If you’ve been reading my blog posts then you know that I always check out the menu in advance.  The crack rolls had me intrigued from the get-go.  Turns out they are the softest, warmest, most loveliest sesame milk buns accompanied with smoked butter.  I mean do I need to say more. I could have easily had two servings of these to myself.

Next to come out was the fried chicken and the buffalo cauliflower.  The fried chicken was good but personally for me still paled in comparison to the chicken from Bar Fancy.  They did a good job with it overall but the spice blend that Bar Fancy uses is just out of this world. One serving was plenty for two people.

The cauliflower was delicious, we needed some vegetables after all even if they are battered and draped in buffalo bbq sauce.  I found this to be the perfect accompaniment to the fried chicken allowing the spice levels to balance themselves out.  It was also topped with a blue cheese dressing that wasn’t overpowering and worked really well with the bbq sauce. 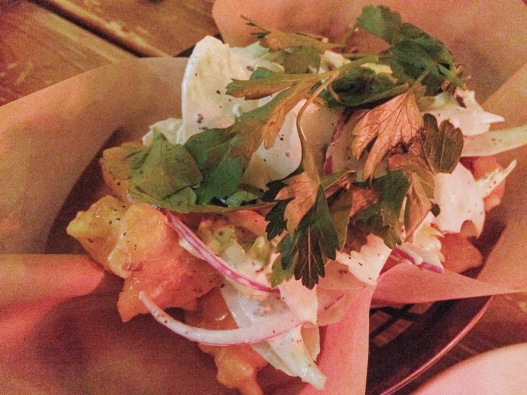 And finally the ribs.  Personally I would never really try to make ribs at home so when I go to a BBQ joint you better believe I’m gonna order ribs and you better believe I will expect good things.  Unfortunately this was the most disappointing dish of the night.  The last place I had ribs at was Old School and they were GOOD.  I mean finger licking, fall of the bone, eat till you can’t walk GOOD.  These were actually rather dry, tough and not very flavourful.  There were also only three ribs in a serving which typically if you’re two people you’re gonna want to split the dish.

So overall, I would come back.  I would also come back not wearing anything I particularly like or with clean hair since I left smelling like a bbq smoker.  After reading some other reviews it sounds like their brisket sandwich is a must try and the rib ends just LOOK delicious.  Alright Summer, it’s time to get here already!