No one likes to be kept waiting.  Most of all no one likes to be kept waiting for almost an hour for a meal that they had a reservation for.  This was unfortunately the situation we were faced with when we arrived to Pastizza on Friday night a few weeks ago.  I had never heard of the restaurant until it showed up while I was scrolling through Open Table looking for inspiration.  It made my list and low and behold we booked a spot when we were looking for a new place to try.

I had read a few mixed reviews but overall the place sounded like an eclectic, modern and trendy place to dine.  Co-owend by Paolo Paolini, founder of Splendido and Mistura, and Thomas Baker of Thomas George Estate winery in Sonoma, California you would have to expect a high level of culinary expertise.    We walked in and were instantly impressed with the ambiance, decor and overall vibe of the place.  Although its situated in one of the most iconic areas of the cities (St. Lawrence Market) it really did feel like we were in another city a la New York or Chicago.  Upon entering your gaze is instantly drawn to their 30 foot wine chandelier housing their very own “Pastizza” branded wines.

We were told that the wait for our table would only be about 10 minutes so we took a seat in the waiting area and took advantage of the time by ordering drinks and an appetizer.  I had read alot about their “Bomba” which is basically an inflated thin pita dressed with your choice of toppings.  We went for the Bruschetta (Oven dried tomatoes, green olives, garlic, red onion, extra virgin olive oil, arugula and parmesan).  Unfortunately I didn’t get a picture of it when it was inflated but you can get an idea of what it would have looked like.  It was delicious and such a unique dish.  Definitely a messy one though, there’s no fork and knife required for this one! 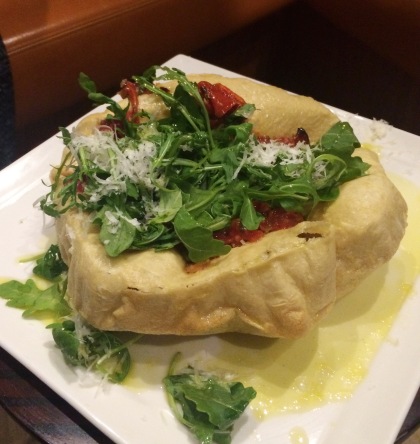 Needless to say our 10 minutes turned into an hour.  One of the main staff members Dimitri was very kind and gracious with trying to keep us updated which was appreciated but it was hard not to feel frustrated especially when we were initially told that they were literally waiting for the table to pay.  He gave us complimentary bubbly which you know I can never say no to and when we were finally seated he definitely did everything he could to make up for the wait which was absolutely appreciated.  On the menu we had:

I gotta say, the food was DELICIOUS.  Our mains came out first (we ordered the funghi and spaghetti) but Dimitri brought us the Margherita so we could taste it.  The toppings were fresh, the pasta was homemade and the pizza was clearly cooked in a traditional oven.  The food definitely rivals some “go-to” Italian spots for me.  Nothing over the top or fancy but just simple, tasty dishes.

We had some heated debate over the dessert but only because I by nature gravitate more towards caramel based desserts over chocolate.  What worked to our advantage was that we got to try both (compliments of our new friend Dimiri).  My favorite was by far the sticky toffee pudding.  Its a good thing we were sharing because I could have easily had the whole thing to myself.

The verdict – there’s no denying the food was excellent.  I loved that it was also located in a different part of the city that I don’t often venture out to.  The service and attention (once our wait was over) was stellar and for a place that has only been open for 6 months, my assumption is that they are still working out some kinks. Will I go back?  Probably but not necessarily in the near future.