I clearly have two challenges when it comes to this blog – 1) sheer laziness of not writing more often and 2) going to a new restaurant and getting so caught up with the food and the company that I forget to take pictures.  I guess the 2nd isn’t the worst thing in the world since I’m trying to detach my phone from my hand and actually ENJOY the moment but its clearly becoming detrimental to my blogging career.

So with that I bring you my review on Luckee, Susur Lee’s latest and greatest addition to the Toronto restaurant scene.  Its positioned as a high end Chinese restaurant and an all day dim sum spot which to my content is located at the Soho Metropolitan hotel and right around the corner from where I live.  The space was formerly occupied by Senses and has now been gutted and re-done in a way that you can’t even imagine the space in its past life.  The decor was courtesy of Susur Lee’s wife and it takes cues from traditional Chinese colours and art. My first experience at Luckee was a last minute drop in at 10:55PM on a Friday night where we jokingly (and kind of seriously) were told that the kitchen closed at 11 and we had exactly 5 minutes to order.  From what I remember of the gun shot order we had: Szechuan Hot and Sour Soup (Vegetarian) Sweet and Sour Chicken with a pineapple and rice basket General Tao Crispy Sesame Beef Yunnan Fried Garlic Rice Noodles with egg white, asparagus and green onion Curry Shrimp Spring Rolls I remember that my favourite was by far the soup and the Sesame Beef.  I digress, no pictures to prove either of the delight of the two dishes. My second time was on a Saturday afternoon with some girlfriends to take advantage specifically of their dim sum.  We had: Szechuan Hot and Sour Soup (obviously) Yunnan Fried Garlic Rice Noodles Shrimp Cheung Fun – Rice Roll Crispy Taro and Turnip Cake Spinach and Mixed Vegetable Cheung Fun – Rice Roll Sticky Rice Dim Sum (was off the cart so not sure of the exact name) Salt and Pepper Crispy Tofu Only a few pictures so hopefully they are worth it. 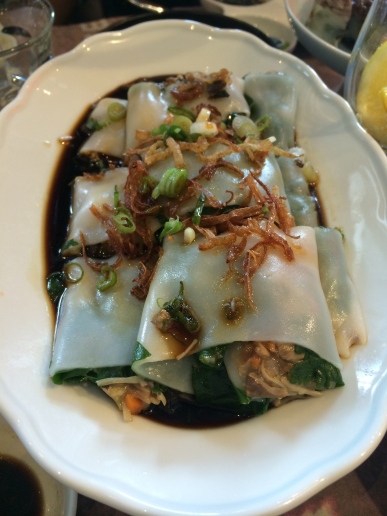 The verdict.  Price wise you will absolutely be paying double for dim sum compared to some of the more traditional places in Chinatown.  The food – definitely delish and the service was quite helpful in helping pick the right dishes.  I don’t think I would order those noodles again but so far the soup, beef and most of the dim sum was really yummy.  Also, I do love my girls but since they were all vegetarian I think I’d like to give some of the other fish/meat dishes a try for the next round.

Until the next time where I promise to take more pictures at least of that soup.